skip to main | skip to sidebar

Trial slideshow - anyone know how to improve the image??

Remember when we had a blog, and were on the road???
Posted by SpringLandon at 17:24 No comments:

Back on the road

Tomorrow morning we depart for Latitude, a music festival two hours or so northeast of London that's supposed to be family friendly. We will be taking the caravan, and camping there for the weekend.
I've been on deadline this week and Daniel's been looking after the girls, so we are not really prepared to go. We'll have to clean the caravan when we get there.
Somewhere on its trip from Galveston, Texas to Southampton, England, the Airstream seems to have lost the tent, table and amazing Coleman chairs we had packed in it. It seems that customs couldn't figure out the latching system on one of the closets, because the door got bashed in. Maybe they wanted some camping equipment as well?
Daniel's bought a generator, two water tanks (one for clean water and one for grey), plus a watertight bucket so we can use the toilets.
Glamorous this is not going to be. But hopefully we'll have some fun.
Stay tuned, we'll post some thoughts and photos on Monday.
http://www.latitudefestival.co.uk/home/
Posted by SpringLandon at 16:17 No comments: 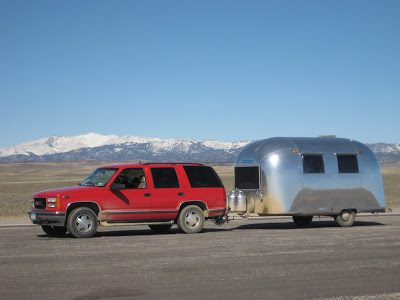 We actually have a sort of Big Plan for the trailer. Well, maybe it's more accurate to call it a medium-sized plan.

We're hoping to rent it out as a prop/location thing, assuming that movie/ad/TV/fashion people will pay us a little bit of money for the privilege of photographing and filming it.
My friend Andrea thinks he can knock up a website powered by the blog, and maybe someone nice can take some photos.

Funnily enough, there is Another Airstream in the area. It's a big huge Airstream bus, rather than a trailer. It's all pimped out on the inside, so the owners are able to rent it out to PR and fashion people. Ours probably won't get that fancy. But it sure is cute.

Here's the money shot from our trip.
Posted by SpringLandon at 19:26 No comments:

The Airstream has landed 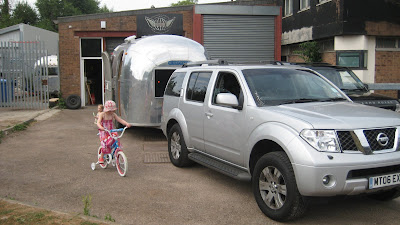 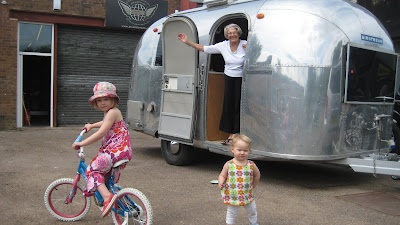 We've gotten it back. The Airstream is once again ours for real, it's jumped back out of the blog and re-entered our lives.

Sophia asked if she could scream for joy, and we said yes. So she let out a few of her trademark screams, which were quickly echoed by Lulu.

Darren at ARC Airstreams gave us a quick rundown of how all the new parts worked, and then explained that he had gotten the electricity and gas to work (yippee!).

Two funny things happened on the trip back from Taunton to London:

- we saw Daniel's brother Tim on the highway. Have you EVER seen someone you know on the highway?! And if it does happen, is it a sibling who just happens to be going the same way at the same time, halfway across the country? Of course, Tim being Tim, he just smiled, waved and kept driving - as though that were a totally normal situation. It's good to know he's finally seen the trailer, the star of so many of our stories.

- during our one stop, at a rest area, a guy asked Daniel if he could buy the trailer from us. He and his lady friend had been staring at the thing when Daniel came back to the car, so they got chatting. Daniel said we didn't know how committed we really were, so the guy said "Great, I'll buy it from you at the end of the summer".

Amazingly, we (meaning Daniel) managed to back it into his workshop parking lot, and then into a single parking space. The UK hitch includes a small wheel, which allows a person to pull/push the trailer into an ideal position. This came in very handy tonight, with Daniel using that method in between two separate car-hitch manoeuvres.

So we missed the second half of the World Cup final, which Spain ended up winning 1-0 in extra time. Yey, España! (We wanted you to win). But we parked the Airstream, which is also a major feat.

Are we crazy? We suspect that we might be. But it's pretty cool to have our Airstream back. And it does look mighty nice with our new, used Nissan Pathfinder (check out that grille).
Posted by SpringLandon at 18:57 2 comments:

Can that sense of the American open road be exported to England? Will our Airstream even fit on the roads over here? Is there space for an (offensive) SUV + 1966 Caravel at gas stations? Where are we going to park the darn thing?

These questions and so many more will soon be answered: we are finally picking up our beloved shiny silver trailer this weekend.

Having picked up our Airstream from the port after its voyage across the Atlantic, Kathy and Darren at ARC Airstreams have refitted it to UK standards, with new axles, brakes and suchlike.
http://www.arcairstreams.co.uk/index.html

Unfortunately, the toilet - and other water systems - sound like they are not transferable from the US to the UK.

Finally, on the afternoon of April 24th, we got our lovely house back. Having lurked around the neighborhood for the best part of a week, we were relieved to become full-blown residents once again.

Sophia ran straight up the stairs and into her room, just to check it was still there, before inspecting the rest of the house. The letters spelling out her name were still intact on her bed.

Daniel wandered around, admiring all of the handiwork – curtains, doorknobs, painting, doors, yet more storage space – he had completed before we moved out. He felt like a king in a (bijou) castle many times the size of an Airstream Caravel.

I marvelled at the thought of No Stuff. Even vastly reduced, Stuff had been the main impediment to life on the road. Our clean and tidy house still boasted the furniture, kitchen stuff, TV, etc, that we had left behind, and we had learned to live with (comparatively) few things. Why ruin this, when we could lead an uncomplicated life of minimalism?

Lulu, for her part, having left this house at the age of six weeks, seemed to perceive that at last we were home. That night, for the first time ever, she slept the whole night through.
Posted by SpringLandon at 08:44 No comments:

So recently returned to London, we had forgotten about all the petty crime. At high noon on our first full day back, we intercepted a mobile phone theft.
“Help, this guy’s trying to steal my phone. Call the police!”, a passerby entreated us. So, naively, we walked over and asked what was going on. A local thug on a bike had asked to see the man’s phone, and then tried to walk away with it. So, reaching for my ancient Nokia – and realizing I didn’t remember what the number in England was - I took a photo instead. Or pretended to – I had also forgotten how to use the camera function. The perpetrator got mad, telling Daniel to make me deleted it. Daniel said no. Sophia asked what was going on, and Lulu rubbed snot onto my top. The guy eventually let up his fight, issued a threat for the future and then cycled off.
Later that day, two kids tried to break into our car.
The following afternoon, a neighbor across the street told Sophia that the thumbtack she had retrieved from his windowsill had been dipped in rat poison. Angrily, he said that the hundreds of other such rat poisoned tacks were there to prevent pedestrians from sitting or leaning on his windowsill. Challenged as to why that was a good idea – on a thoroughfare frequented by children – he retorted that youngsters were the worst offenders. I asked whether erecting a sign to warn parents of the danger might be a good idea, even offering to make one myself, he said that was beside the point.
So, I called the police. They sent the neighborhood safety patrol around, and nary a tack has since been seen on Columbia Road.
Posted by SpringLandon at 08:24 No comments:

SpringLandon
United States
Claire – On maternity leave from career as editor of monthly finance trade magazines, and occasionally a freelance translator. Half-American/half-English, raised in the suburbs of New York, has lived in London for almost nine years. Daniel – Furniture designer/maker based on London’s Columbia Road flower market, for ten years, also an aspiring painter and DIY supremo. On one-year career break to reconsider options. English by birth, but mother is half-American and spent part of her childhood in Bronxville, New York. Sophia – 3.5-year old spitfire who loves school, singing, swimming and being a big sister Lulu – Born May 8 of this year, a model baby who eats, sleeps and gurgles. Special guests – American, British and international friends and family who drop in along our trip to see whatever part of the country they fancy. They’re welcome to travel in the car with us and sleep in an adjoining tent.